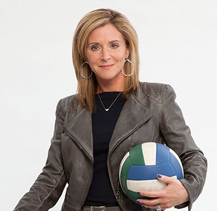 Dr. Caroline Silby is a nationally renowned Sports Psychologist, published author and faculty member at American University. Dr. Silby has worked on an individual basis with two Olympic Gold Medallists, twelve Olympians, three World Champions, eleven National Champions and over fifty National Competitors, including her role as Sports Psychologist for the US Figure Skating Team at the PyeongChang 2018 Winter Games.

She is qualified to help meet the needs of athletes not only because of her years of academic training through which she earned a Ph.D. in sports psychology but because of the fourteen years she spent training to make the National Figure Skating Team. Her skating career culminated in competing in the 1984 Olympic Trials. While she did not make the Olympic Team, Dr. Silby did find a way to combine her passion for sports with her interest in psychology and the mental aspects influencing performance.

A winning mind-set is as important as a fit body. Dr. Silby offers a variety of services to assist you in better understanding your approach to sports, teaching you how to maintain your focus, and achieving your goals in the competitive environment
LEARN MORE